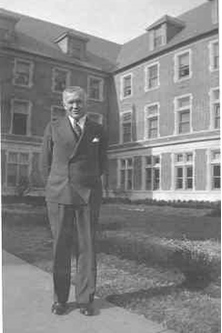 It was not until 1931 that Dr. Matthew Winters, a local pediatrician with a very active practice in downtown Indianapolis, was named the first Chair of the Department of Pediatrics, a role he filled on a part-time basis for twenty years. During his tenure Dr. Winters also maintained his pediatric practice and served as an instructor to medical students and residents.

Dr. Winters was born in Posey County. He taught school in Mt. Vernon, took his pre-medical work at Indiana University and in 1922 received his degree in medicine from Rush Medical College in Chicago. He then established his practice in Indianapolis and for 33 years was a leader in his profession. In addition to his post at Indiana University School of Medicine, he was director of pediatric services at Riley Hospital for 20 years and conducted the children’s clinic there for 25 years. He helped train between 2,000 and 3,000 medical students and pediatric residents during that time.

The pediatric residency program began in 1929 with one resident and increased to five by 1951. In 1931, Dr. Lyman Meiks became the first full-time pediatric faculty; by 1951 there were four full-time faculty including Dr. Paul Lurie in pediatric cardiology.

Following his retirement from his pediatric practice in 1955, Dr. Winters moved to Bloomington where he served as a consultant to the Indiana University Student Health Center and as a lecturer on physiology. In addition, he continued to conduct a children’s clinic for seniors at Riley Hospital. Dr. Winters died on February 14, 1958. Upon his death, the Board of Trustees of Indiana University passed a Memorial Resolution.